Our science topic was about the states of matter. The main goal of the session was to learn about the states of matter and to find out of was the mystery pouder was made of. One of the steps I did was pore the espom salt into water and see if it would desolve. I learned that the mystery pouder was espom salt and baking soda. My favourite part was poring everything into one cup and watching it explode.

Okay, I’m back, where was I… When I lose my page it takes a long time to find it but, if I have a book holder I won’t lose my page and waste all that time. If I’m doing my homework, and I want to copy something that’s written in a book, I have to hold it in my hand. I can’t hold it in my hand because I have to write with one hand and hold the page with one hand but, this will solve the problem because you now have a book holder. When I’m holding a book for a long time my hand starts to hurt and I get exhausted but, if you have a book holder all your problems will be solved. This book holder can help you with homework, your hand getting tired and, your hand getting hurt from holding the book for a long time.

Ahhhhh! I need to leave! The cookies are not in the oven! This cookie cutter cuts out Perfect circles so, when you go to a fancy party your cookies will look like a professional baker made them. When you are using the phenomenal cookie cutter instead of using a knife to cut your cookies it will be much faster. When you are baking you always want your cookies to be the same size so one cookie expands a lot and then one just doesn’t get bigger or smaller. If you’re baking with a special cookie dough that you can only cut once and accidentally mess up, you can’t do it over. If you have the cookie cutter you won’t make that mistake and waste money and dough. If I’m reading a book and I need to cut my cookies I can go downstairs and still have my page saved while cutting my cookies.

Would you like to live in a small space with nothing to do but eat and sleep? I think Luna and Zelda should have a bigger cage because they are getting bored of their setup, they need more space to run around and they need a place to play with their toys.

My final reason is that Luna and Zelda need a little space in their cage to play with their toys. When Luna and Zelda play with their toys their scavenging skills improve. When their scavenging skills improve they can find food on their own without Coby or I giving them food. Guinea pigs don’t exactly know what they’re doing all the time but they find the things that they do very fun. One of the things that they do is take things apart. They also enjoy taking things apart. My last reason is that if they have more space in the cage for toys we can put more than one in the cage. That means they won’t fight over the toys.

Hi guys! Today I am going to show you my legend.

Willow and the deadly dragon 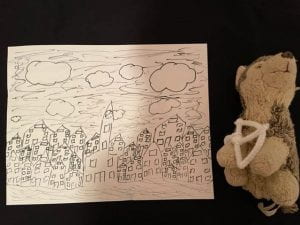 One day when Willow was going down the stairs of his house to go to the market to get dinner he heard a noise.“AAAAAHHHHHHHHHH” said a little girl. Willow ran back up to his window and he looked in the direction that he heard the noise come from and he saw a big dragon. The little girl kept on screaming and screaming for help, but no one came to save her. Willow grabbed his bow and arrow and shield then he jumped out the window to save the little girl. Willow sped through the crowd of people watching the little girl and Willow jumped up into the air and grabbed the little girl out of the dragon’s grip. Everybody started to clap and cheer for Willow as he brought the little girl back to her parents.

The next morning when Willow woke up he felt very proud of himself for saving the little girl. Still, the village was under attack so, Willow quickly, surprisingly, did something very weird…

Willow flew out the window to get groceries in the market. Everybody was staring at Willow in the air flying. Willow got salty chicken, corn, a large juicy apple, a small, medium, and big pear, and one cookie as giant as an envelope. After getting all his food, he returned to his apartment and ate it. After Willow ate his food he walked around the village. “I just saw the…” said Wilow “um hello can you carry please help me carry this across the street.” “Sure,” said Willow. “I hope you understand that I am an old lady that can’t do many things that other people in this village can.”

A few seconds later Willow finished helping the old lady. ”I heard you can fly so, can you please fly me up the stairs.”

The next morning when Willow woke up he heard a noise that sounded like screaming. Willow quickly sat up and got his sword and shield. Willow jumped out the window

for the third day in a row and flew in the direction of the screaming. When Willow was in the air flying he did not see anybody looking at him like the other times he flew. He thought that everybody was hiding inside their houses because they were scared to get killed by the deadly dragon. “Please destroy the deadly dragon and save us from getting killed.” “You are the only person who can save us”.

When he was going to bed he thought about what the man had said. Willow thought about what he had said for the whole night and realized that he was right. Now that Willow figured out that he was the one to destroy the dragon he had to make a plan. In one hour he made a plan that he thought would work. First, he would get everyone away from the dragon, then he would stab the dragon with the sword of Gryffindor, and finally, everybody would be saved and nobody would get killed.

The next day Willow got up at six o’clock and got ready to fight the dragon. Willow grabbed the sword of Gryffindor and went over his plan in his head. Willow jumped out the window for the fourth but there was something different about the jump this time…

Willow got up from the ground and started walking to the deadly dragon. Willow heard many extremely loud

screams and he got a little nervous because the screaming sounded like the whole village.

Willow got there just in time before a person got killed by the dragon. Willow was so surprised because everybody in the village was in the dragon’s grip trying to get out of the dragon’s grip terrified. Everybody was screaming louder than ever before. Willow felt like he was going to faint, he felt so nervous because he felt like there was so much pressure on him. Even though he was very nervous he jumped up in the air and surprisingly, flew again. Willow freed many people from the dragon’s grip. Willow tried to kill the dragon but the dragon was way too strong to die from a cut. Willow tried to kill the dragon but things just got worst because everybody was dying quickly.

A few minutes later everybody was dead except Willow who was hanging off a cliff trying to get back on his feet. The dragon breathed fire and almost hit Willow. With all his strength he took the sword of Gryffindor and stabbed it into the rock and used it as a step to get back on his feet. Willow ran into the dragon and stabbed it in the heart and killed it. Willow looked at the dragon proud that he killed it.

Two seconds and five hundred and fifty-six milliseconds later Willow looked at the dragon one last time before throwing the dragon into the river but, the dragon

wasn’t there. Willow couldn’t believe what he was seeing, he saw all of the dead people from the village in front of him being still and silent. Willow couldn’t tell if this was real or not but something inside of him told him it was really real. The whole village started cheering and saying “you are our hero” to Willow. Willo went to his house but it was a little bit difficult for him to get there because everybody thanked and thanked him. Willow was extremely proud of himself for killing the dragon. Now this story is a legend that has been told for thousands of years.

Hi guys! Today I am going to show you my presentation on the seven teachings.

I think that love is the most important teaching because if you want peace there needs to be love or you will end up like Voldemort.

Hi guys! Today I will tell you about the project I did with my friend Saturn. We were told to do a project on rocks and minerals.

What did we decide to do?

Marble is a sedimentary rock. When limestone gets buried deep in the ground for millions of years, the heat and pressure can change limestone into metamorphic rock. Marble can be in many colours.

Amethyst is an igneous and gemstone rock. Amethyst comes in various shades of purple and it comes with glossy white streaks. Ancient Egyptians used Amethyst in jewellery. When amethyst is exposed to heat geologists have found that it gets darker.

My learning goal was to show what I learned about rocks and minerals.

How I found self-directed science?

At first, I found it a little bit hard to think of what I was going to do for my project, but then in the end I found it easier and more fun to do my project without having to do what the teacher said.

In conclusion, I found self-directed fun.

Here’s a picture of Saturn and I’s project

Hi guys! Today I am going to tell you about my public speaking.

First I am going to tell you what my speech is about. My speech was about why crab trapping should be stopped. In my speech, my three main points were animals that have been affected by crab traps, the number of declining crabs, and Winter the dolphin’s story. I also added a paragraph about what traps are.

The part about public speaking I found most challenging was speaking. I found speaking very hard because for me it is very scary to speak in front of people. I also found it scary because everybody was looking at me. When I found out I got into the finals, I was very happy but I also got more scared because I would have to talk in front of grades not just one class with eleven people. When I arrived at the gym, I found out I was going first. I was so nervous and my heart was beating as fast as the wings of a bee. When I got called up to stand in front of the gym, I started to shake a lot because I was so nervous. Then again, everybody was looking at me and that just made me even more nervous. In a few seconds, I started, and even though I was so nervous and scared I did my speech in front of the crowd. Then I was done the scariest part, it was over.

Next time for public speaking I would speak a little bit louder, try not to get as nervous, look up at the audience more, and have more hand gestures.